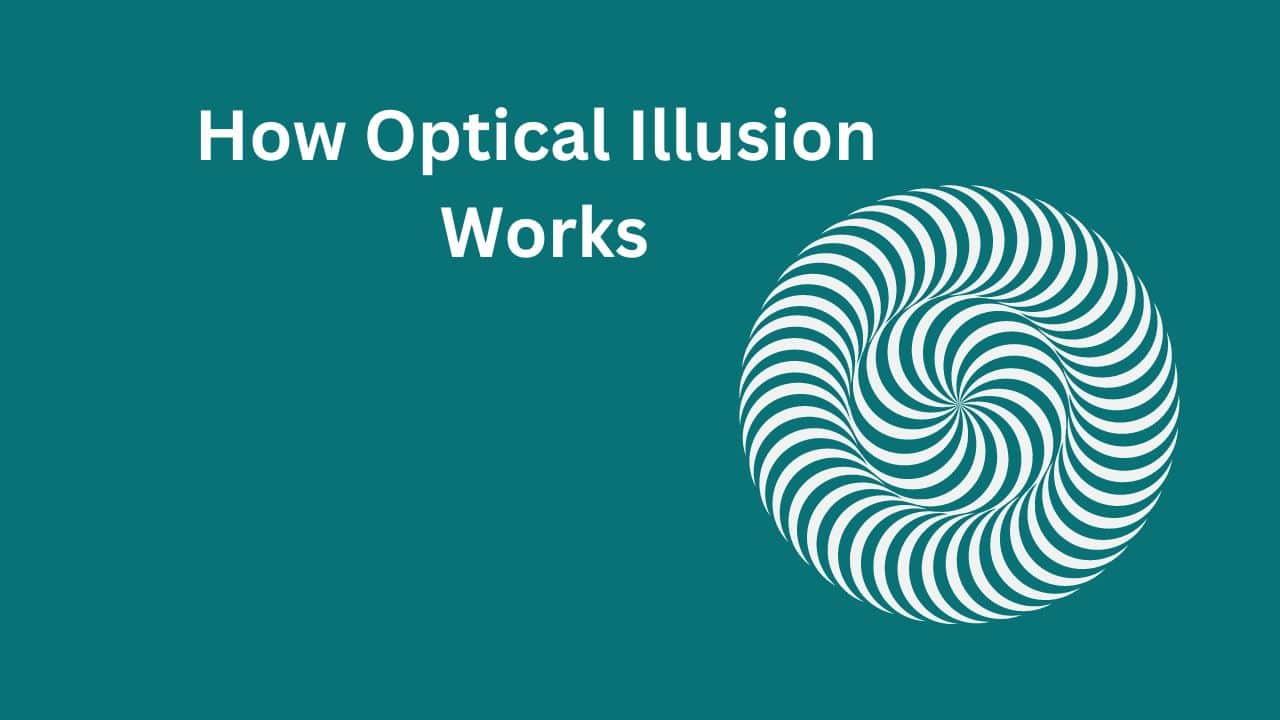 How Optical Illusions Work: Optic illusions have fascinated people all over the globe for centuries. It’s amazing to think that your eyes can fool you into believing that something is actually there. You’ll be able to see why your eyes are so brilliant if you dig into the world of optical illusions, brain games, and other brain tricks.

The illusion that you are looking at isn’t moving, but it isn’t! This image appears to be moving because of what’s known as illusionary motion. Images that appear static can give the illusion of motion by using color, shape, and curvature. Why is this possible?

One theory is a cognitive interruption in the brain. This disruption is caused by edges between black and white (notice the subtle use of black and white converging throughout the image). Or perhaps our brains perceive light and dark as motion.

The perception of light and darkness, called Luminance, is not very reliable. Our brains can perceive lighter values more quickly than darker values. This is why the spiral appears to be moving in the opposite direction. You can also reset your perception of motion by blinking, shifting your gaze, and looking back and forth.

In 2012, a study on illusionary motion revealed that blinking and tiny eye movements can make “snakes’ appear to move.

Your brain needs to rest so optical illusions are possible. Colors, shadows, and perspectives are all important for the brain to understand what it is seeing. Your brain then forms an opinion based on these clues.

Your brain will be confused if the clues are optical illusions that induce things such as lateral inhibition (Hermann grid illusion), pareidolia, or Troxler’s effect (things within the peripheral vision fade),

You can see the example in action. Look at the image below. Many people mistakenly assume that it is a.gif. This means that it is animated. This static image is not moving. This optical illusion is created by the tiny, quick movements of your eyes while you are looking at the pattern.

You can’t blame your eyes for the rapid movements of your eyes. This movement may cause you to “see” the image after the change. It’s like a ghost image overlaying a new image. This creates the moire effect, which is a ripple effect. It changes how you perceive the object when similar patterns are repeated and merged. Your brain believes the image is moving because of this.

Science Behind Your Eyes

Because researchers see them as more than just entertaining brain games, neuroscience and optical illusions are closely interwoven today. To study the brain of human beings, they use optical illusions. This is how the brain interprets information sent to it by our eyes.

Your eyes process a lot of information quickly. It takes only 13 milliseconds to process an image in the human eye. After “seeing” an image, the brain continues to process it subconsciously. Your eyes constantly try to interpret what they see and your brain constantly tells them what to look at next. Sounds exhausting, right? It’s exhausting, even for the kings of your central nervous system.

The theories behind optical illusions can be traced back at least to the Greek philosophers of the 5th century BC. These innovators proposed that our sense organs could deceive us. Plato was the first to realize that optical illusions are possible because they depend on both the senses as well as the mind.

You can fast-forward to the 19th century, and you will find scientists, philosophers, and artists all over the world, like Johannes Mueller, J.J. Oppel, and Hermann von Helmholtz, who are diligently researching optical illusions. W.E. Hill was the first to create Op Art in 1915.